The Power for Change Project

“Once upon a time a theatre company and a group of people known for trying to open space for conversation decided to get together to encourage a different type of conversation. A conversation which is possibly the most important one we could be having in this moment in time. Our great experiment.” – Alex Sangster, MPTC.

It’s been almost four months and a worldwide pandemic since we gathered together at The Common Room, Trades Hall in Victoria Street. Built in 1856 after a winning campaign to secure the world’s first eight-hour working day, it felt like a fitting venue. The imposing classical columns at its entrance seemed to symbolise success through solidarity. And that’s exactly what we were hoping for on this hot yet rainy Tuesday evening.

A convivial audience milled in, umbrellas in hand, steam rising off wet wool. Some stopped to chat and get drinks at the bar. Yet more followed until The Common Room was at capacity. The small room, packed with 70 warm humans began to rise in temperature. Which was also fitting as the topic de jour was one close to the heart of Melbourne Playback Theatre Company – climate crisis. 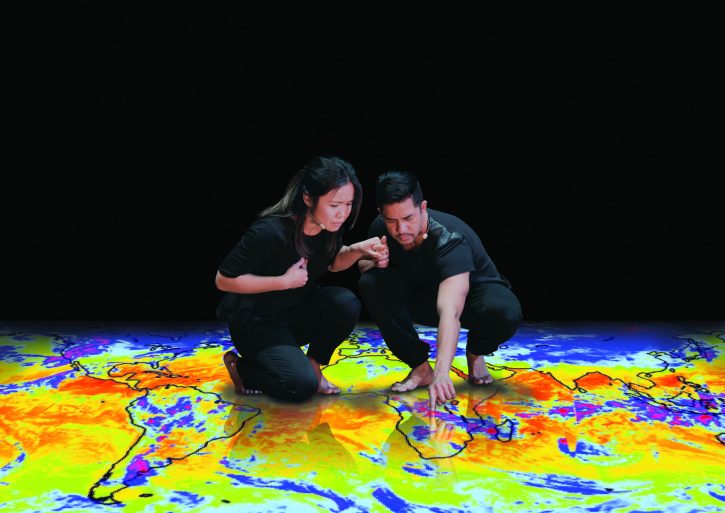 The event was a co-production between Playback and Climate for Change. It promised to offer a unique way to become educated about our climate crisis. To provide space to reflect and share concerns. To engage in meaningful conversation about positive and effective actions that are already being made in our communities and provide an opportunity to become part of that change. No mean feat.

We began with an acknowledgement of country; country, we are reminded, that was never ceded. A familiar sense of shame fuelled my awareness that before this country was stolen, the original inhabitants nurtured and safeguarded it for tens of thousands of years. Yet, in the relatively short time in other hands it has suffered such acute disrepair. 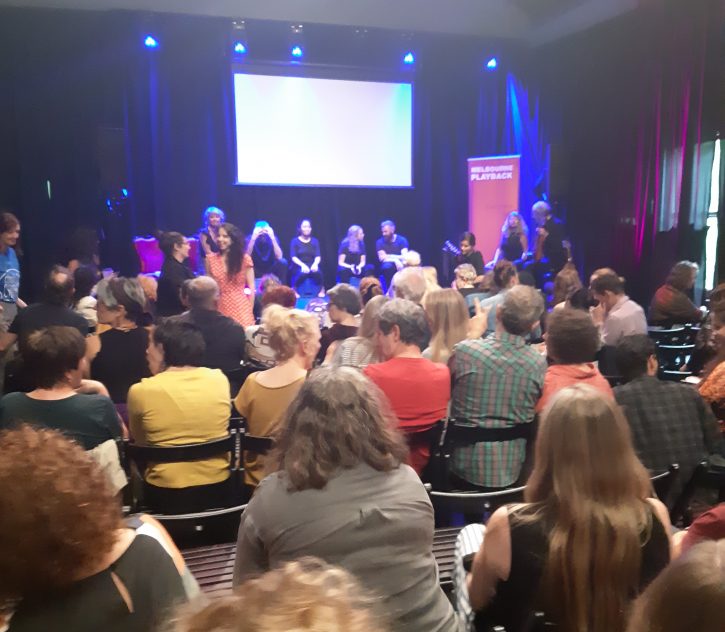 This uncomfortable feeling was somewhat alleviated by our fantastic co-stars for the evening, Carly Robertson and Jeremy Dore from Climate for Change, who promised it’s not all doom and gloom. They chose to let their signature 20-minute documentary speak to the crisis. Images of storms, drought, mistreated animals, melting glaciers and other dire happenings were tempered by the hopeful message that there are also innovative ideas and solutions circling the globe from concerned change makers.

I really connected with the company’s simple philosophy for social change. Their research shows that people process information, shift attitudes and develop deep commitments to ideas through conversation with people they trust.

Simply put, if we spread the word to enough friends and family, we will create a groundswell of concern for the planet that will eventually form a ‘tipping point’ whereby most of the population will prioritise addressing the climate crisis and vote accordingly.

We are urged to become part of the upswing on the bell curve instead of climate change denying laggards that are lost to the cause. This sent a positive ripple through the theatre.There was hope. And hope, I realised, had been the thing that was nearest extinction in my own mind.

In closing Jeremy and Carly welcomed us to stay after the performance to chat to either Climate for Change, Melbourne Playback Theatre Company or one of three other grassroots local climate groups (Friends of the Earth, Extinction Rebellion Victoria and Australian Parents for Climate Action) who would be staying behind to run a “marketplace” where we could shop for information or perhaps sign up to become members – thus, giving the audience an opportunity to actively participate in raising the collective consciousness about Climate Crisis instead of just worrying about it.

“I switch off the microphone and walk down the stairs, a man walks up to me: “What a great event, wasn’t it?”

I say: “Definitely, it was awesome. It was so different than anything else I have attended this week.”

He said: “It was not only different, it was much better. So much better than all the lectures and places where you just sit and listen. This one goes straight to the heart.” – Fien Van Den Steer, Climactic Podcast. 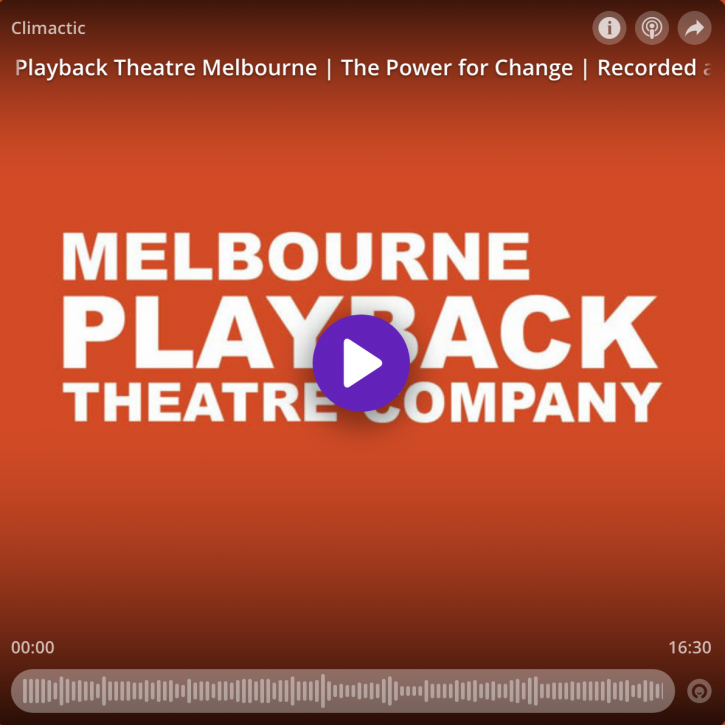 After a short break, the cast, Danny Diesendorf, Phoebe Mason, Diana Nguyen and Josiah Lulham took to their crates for the Playback performance. The microphone was entrusted to the inimitable Alex Sangster. No stranger to conducting on the Melbourne Playback stage, Alex brought warmth and power to her introduction. We were in her safe hands.

Ernie Gruner and Karen Berger set the tone with an improvised melodic piece. Ernie’s searing violin accompanied perfectly by the steady beat of Karen’s drum. Alex invited us to share how we felt right then in that moment. There was a rapid-fire response from the audience – “worried, grief, motivated, angry, exhausted, frustrated” … the evocative music had done its job. This was an audience eager to share their feelings.

We also heard the word ‘excited’ – excitement that so many people were here that night ready to be part of making a change. This inspired a song from the ensemble, lyrics ranging from the funny: ‘You decided to come even though it was raining’ to the uplifting: ‘we can do this together … for change’.

Moments came thick and fast. Hands were thrust up in the crowd. Prompted by the devastation of the recent bushfires, the cast created a scene where animals tried to outrun the blaze. A heroic wombat invited them into her burrow, providing refuge underground from the flames.

When it was time to take a deeper dive into stories from moments, our first ‘teller’ spoke of her anger for those in power stopping positive change. She described them as big wolves with teeth – politicians, climate change deniers and mining magnates.

With this delightful metaphor already provided by our generous teller, the cast stuck to the fairy tale theme with a take on the Snow White story, complete with corrupt kings and afamiliar figure with catch-phrases like – ‘how good’s Hawaii? ‘How good’s coal? The king demanded that Snow White be ‘strangled in the woods by the electoral process’. It felt good to laugh at the buffoonery of the top brass as they fiddled while Rome burned. 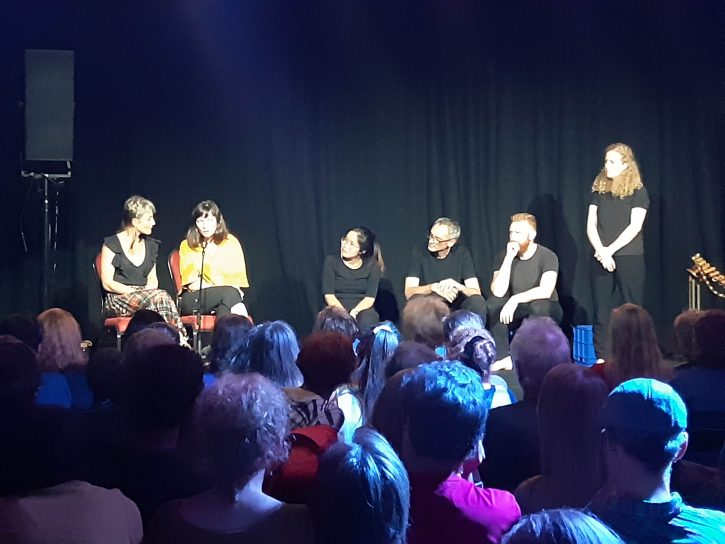 Alex and the cast created such an atmosphere of safety that even our most retiring audience members felt secure to share. Much to the surprise of her daughter, we heard from a single mum who didn’t have much money, but enjoyed the richness of nature. As a child herself, she had been taught the beauty of nature and passed on the knowledge to her own kids – climbing trees with them. Now she was so proud of the next generation leading the cause with the school strike rally.

The cast responded with a forest soundscape. Before our eyes, trees grew and birds arrived. Our lover of nature was portrayed in contrast to the zombies of the city on their cell phones all day, played by the rest of the cast. The scene culminated in a proud grandmother marching with the new generation for a better future. It was a heart-warming image.

Our final story came from a woman who had stories of her wild two-year-old son, concerned by the rest of his family’s frustration with the prime minister. When he announced, ‘I’ll be friends with Sco-Mo’, his mum wondered whether perhaps her wild child’s humanity could be the right way forward. The ensuing scene explored this theme, to reveal life’s not as simple as just discarding the things you don’t like. The show ended with Phoebe saying ‘we need to make friends’. And, for me in the audience, it felt like we had.

“As a journalist, I have been travelling the last few years all over the world, listening to and reporting on stories about climate change. Some of them fill me with excitement and hope. While others fill me with desperation and fear. Yet there never was a place to share these emotions, since they were so unique to the particular situation. Often, I felt alone and lost with them. Yet tonight, I have seen all these emotions coming back, understanding that we are not alone in our fear and despair, nor in our hope and excitement.” – Fien Van Den Steer, Climactic Podcast.

Fien Van Den Steer’s podcast, including snippets from the event, can be found here.