EPISODE THREE – UP CLOSE AND PERSONAL WITH THE GANG #1

Melbourne Playback Theatre Company (MPTC to close friends), has a long, rich history that spans almost 40 years of storytelling, entertaining, facilitating and bringing audiences closer together with its unique brand of improvised theatre. The list of esteemed alumni is impressive. Some of Melbourne’s top performers and theatre makers got their start on a Playback crate. They have contributed to the growth and culture of our company and all have left a creative mark or two.

In 2017, the company re-shuffled once again to bring in four new members, myself included, to usher in yet another new dawn. Who exactly are MPTC these days?

I thought now would be as good a time as any to get up close and personal with this team of incredibly diverse and highly skilled performers. So, I developed a little questionnaire to find out a little more about my fellow players.

Our first featured player is Scott Jackson, AKA Scotty J. The first time I met this dapper young man was at the auditions. I was immediately impressed with his generosity as a performer, his infectious laugh and twinkling eyes – suggesting he might be a fellow impish soul (he is).

An accomplished stage fighter, Scott has instructed the company in a series of workshops on stage combat. His patience is commendable – especially considering my lack of talent at this skill! Getting to know Scott has been a joy.

And, attending his wedding as a company was a privilege for us all. He and his dashing husband Kyle looked so handsome, not even their gorgeous fur-child, greyhound ‘Elaine Bennis’ (who is literally a beautiful grey hound) could upstage them. Here are his answers to some curly questions and a couple of photos of some of his memorable roles in theatre. Enjoy.

In year 10 I performed in the school musical Back to the 80s. It was a great hit and the family that we created while rehearsing was amazing. At the end of one show I saw my homeroom teacher clapping so hard and wanting to stand up, but got shy as no one else around him was going to stand.

That look of pride from him as he looked at me when I bowed will always stay with me.

Also at the end of one of the show, we were all getting into people’s cars and the “cool” people (whom I looked up to so much) that were in the cast wanted me in their car. I felt so accepted and loved that I distinctly remember thinking to myself with a big smile – “I want to do this for the rest of my life.” And so, I am. 🙂

2 – How does improv help you in your day to day life?

Being able to look at a situation, pull it apart in a second and respond accordingly. Especially in hard conversations or recognising that someone who is angry isn’t necessarily angry at what is going on. It’s a deeper sense. Being able to listen more and notice when I am not listening! 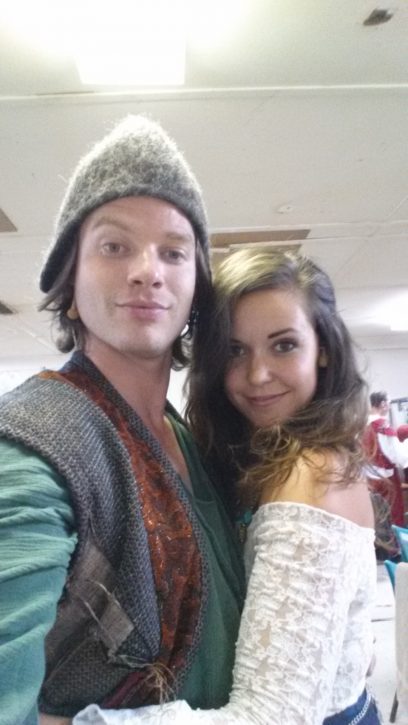 3 – How are you using your creative juices during the COVID19 restrictions?

I haven’t really. I have had a very hard time. I have pushed myself away from anything artistic and creative. It’s the exact opposite to what I need right now, but for some reason, I can’t bring myself back into the world I want to live in.

4 – What was your most terrifying moment on stage?

Physically, when I was performing a touring Musical of King Arthur we had a sword fight with broadswords. My opponent had friends in the audience one show and went hell for leather. Using so much strength. I was fighting for my life, as, if I didn’t parry, or do the choreography, I may have been really injured.

In terms of something mucking up: Performing in a show that I didn’t care about and finding out last minute that my mentor is coming to watch just minutes before going on. I was terrified, upset, and mostly embarrassed. I wanted to leave and not do the show. But of course, the show must go on.

5 – What was your most memorable moment on stage?

Performing Romeo and Juliet as Mercutio for the Australian Shakespeare Company to an audience of over 800 with my beautiful Nanna at the back. I put so much more energy into the character that night and the audience and the cast had a great night!

My most proud moment was during the bows, and seeing my Nanna up the back waving her white hanky crying.

She was never a theatre goer, so to get her there was a big struggle and to see her proud and bursting with love just made my night. The ability to affect and audience is so powerful.

6 – If you could play any historical character, who would it be and why?

Would love to play Oscar Wilde in a play about his life. Would be epic. His plays are just so full of goodness and British subtext – genius. I would also LOVE to play Macbeth on the main stage. A juicy character that goes through so much on stage, and off and before the play even happens!

7 – What is the surprising upside of the pandemic for you?

Getting to spend so much time with Kyle and the darling Elaine. Also, being able to organise the house and do the jobs we have been meaning to do for ages.

8 – In your opinion, what makes a good story?

Heart, truth, conflict to some degree. Vulnerability and energy.

9 – Do you have any pre-performance ‘must do’s or superstitions?

Usually before a play I will do a 20-min vocal warm up. Go through all my lines while I stretch for another 20 minutes, and walk around the space before time is called to go hide in the dressing rooms. I also MUST say hello to all crew and staff. A happy Stage Manager and crew makes for a better show ;).

NO superstitions, however I will not say “Macbeth” in a theatre. 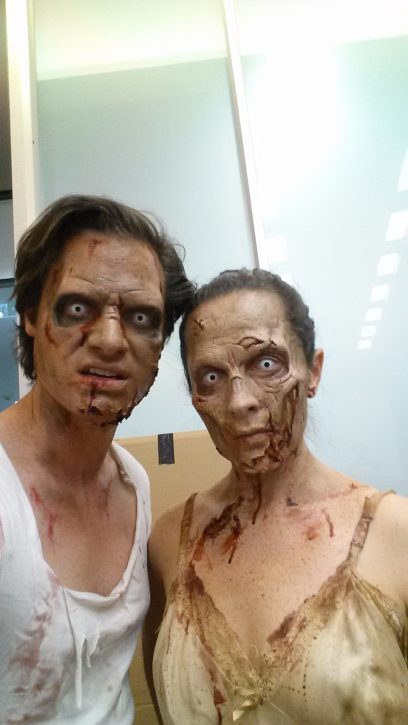 10 – If you could thank someone who helped you in your early career – who would it be and why?

Andy Hamilton. She pushed me into doing drama and the school production because she saw something in me that I didn’t. I thought it was silly, but once I got the bug, I was hooked. Ross Hall, my uni acting teacher. Taught me so much and had faith in me. He pushed me hard and then harder still but, fuck, he was good. I owe him so much.

11 – What do you miss the most about not performing during the COVID-19 restrictions?

EVERYTHING. The lights, the sounds, the feel, the black curtains, the smells, the words, the life, the lives, my family of actors, the text, the words, the emotion, the outlet, the trust, the love, the passion. THE PASSION, the purpose, the connection, the makeup, the silliness, not being me for a time. I miss everything which is why I think it’s so hard for me to watch something or do anything artistic. It’s too painful right now. It’s like I have lost a lifelong companion.

12 – Who would you want to play you in the story of your life.

Me. Haha! Tom Hiddleston. Great actor, physical, lovely, and has a great range. Or, of course, Meryl Streep.