When we first went into lockdown in… I can’t even remember the date, now – but t’was many moons ago, the Doc and I started a (mentioned in previous blogs) very tricky jigsaw. There were basically three colours. Snow. Sky. And tree. We could only work on it in the weekends as it was safely hidden under a tablecloth, covered in books and computers, in a nifty home/office set-up, during the week. The pieces were tiny, as was the picture on the box – hence the need to wear our 1.5 magnifying specs (ah, the joys of ageing). These thousand awkward pieces seemed to represent the task of the nation or at least the state of Victoria (and particularly the dwellers of our small apartment), to link together, figuratively – social distancing and all that, to create the big picture. We fooled ourselves into thinking that there was a direct link between this puzzle of ‘Boreal Forrest in Snow’ and the length of the lockdown. In other words – if we could just finish the f*@king thing then we would be free again and liberate the city to boot! 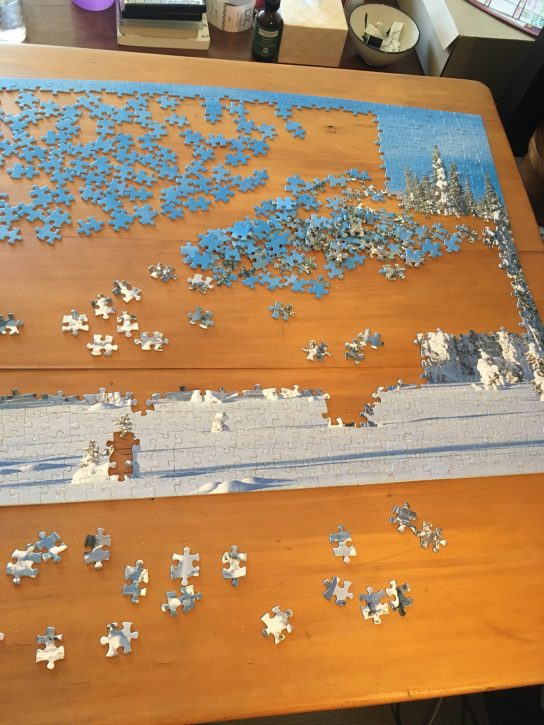 Each weekend we would excitedly pack down the home office to expose our real work. I am proud to say the toil was always collaborative, never competitive (well maybe there was a little race to fill a particularly stubborn hole, occasionally).

We developed a language of our own, similar, I imagine to other jigsaw families out there. It was not at all out of the question to ask, in all seriousness, if one or other had seen a cinch-waisted, big head, dip toe?

We mainly worked in shifts – in between watching ‘RuPaul’s Drag Race’ on Stan (a pandemic must see, if you haven’t). A triumphant tap of a piece in place followed by a resounding ‘YUSS’, signified success. Toward the end, it was not uncommon for one of us to rush down the stairs to see exactly which empty space had been satisfyingly plugged and ooh and ah over the success. Celebrate the small wins they say, and so we did. 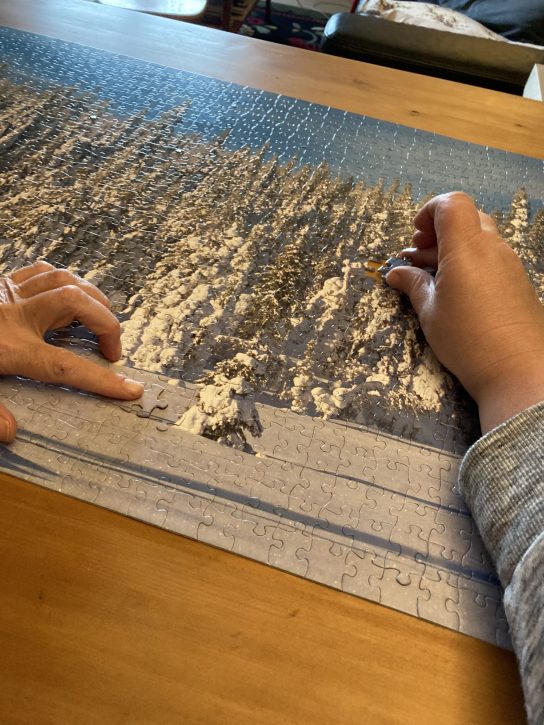 There was also a fair amount of stress that, as the puzzle was second hand, perhaps the set was incomplete. We imagined how rough this would make us feel. And, as pieces found homes, and the picture began to form, this stress became a genuine concern. There were a couple of places that we could not find the perfect match for love nor money. There were also times when we had to undo a near perfect match that had stuffed up a whole section. I’m not going to lie, this was an intricate job and we were rookies at it. We learnt a lot. A tip for first timers – check the floor religiously! Random escapees often need to be caught and returned to puzzle prison.

The weekend of September 13th we finally finished it. Every, single, piece found its home. It was done!!! Complete!! …Just in time to get another two weeks on our already long lock-down sentence. To say it was anti-climactic is too much. It was worse. There was just an emptiness. Had we failed, or succeeded? 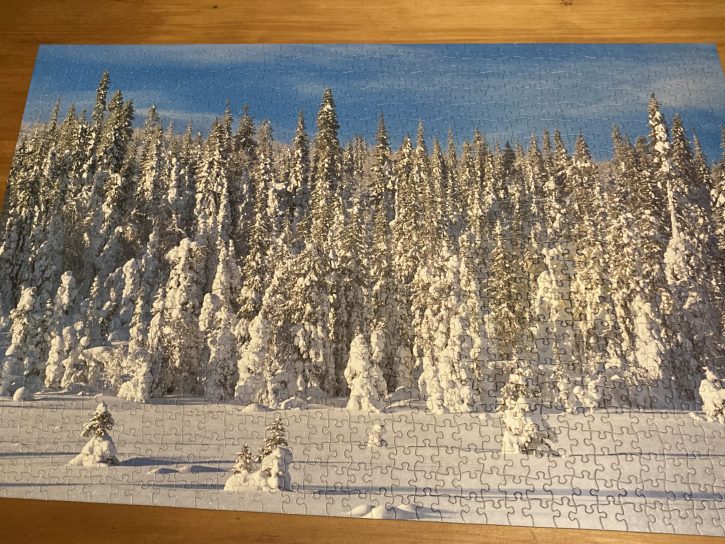 I guess the lesson is to invest in the journey, and sometimes the big picture does not provide the big picture. But we sure were jig-sore. We walked Merri Creek with a lack of pep in our step, with no jigsaw to rush home to. BUT… As we returned we saw a new batch of books on our apartments building’s very cool, bring-a-book-leave-a-book-library set up. As we browsed, what should we see? Could it be? Another 1000 pc jigsaw. What a find! So! We are now the proud puzzlers of ‘Sumo and Bobo’ a very seventies looking picture of two baby orangutans. There are three colours. Green, Brown and Orangutan! Maybe this time, folks. Maybe this time!